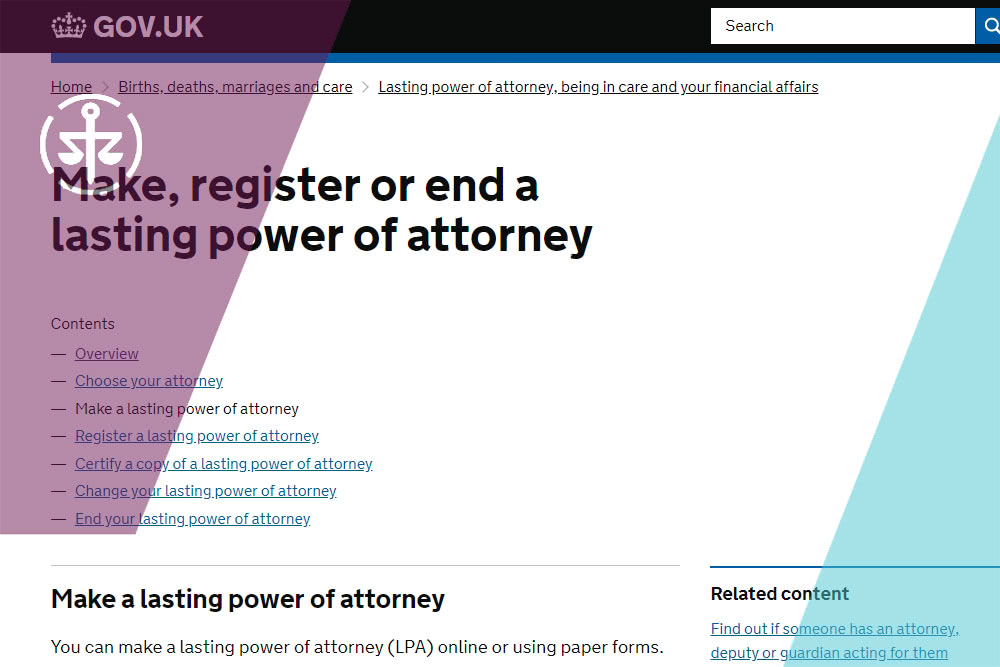 A coalition of organisations including Solicitors for the Elderly (SFE), Action on Elder Abuse, Anchor, Contact the Elderly and SOLLA are backing the new report

Solicitor Bryony Ruth Wilmshurst from Cunningtons Solicitors LLP based in Braintree has joined a number of organisations representing older and vulnerable people to raise serious concerns around the Government’s online tool for creating Lasting Powers of Attorney (LPAs).

An LPA is a powerful legal document that allows a person to appoint trusted individuals to make important decisions about care and finances on their behalf, in the event of a loss of mental capacity through an accident or illness such as dementia.

In May 2014, the Government’s Office of the Public Guardian (OPG) launched its online LPA tool, which it claims allows people to create the documents without the need for professional advice from a solicitor.

But a new report, published by a coalition of organisations led by SFE, warns that anyone creating an LPA without taking specialist legal advice faces a significantly higher risk of being left with an ineffective legal document, incurring additional application fees, and even becoming a victim of fraud or coercion.

The report also raises concerns around the potential of a completely digital system proposed by the OPG, whereby ‘wet signatures’ – the physical signing of the document – would no longer be required.

“The prospect of being able to submit an LPA application entirely digitally is extremely concerning, and raises some serious questions around the potential for fraud and financial abuse.”

During a study conducted for the report, participants were invited to create LPAs using the OPG’s online tool and other ‘DIY’ methods. The study revealed that:

June McSparron, a 75-year-old who participated in the study, said:

“You’re exposing yourself to a lot of risk by filling this form in on your own. There are so many bits that you can get wrong, and you can easily be pressured into making choices that you’re not entirely comfortable with.”

The number of LPAs being registered has increased steadily since the launch of the online tool, with over half a million registered in 2015/16 alone. The OPG is actively trying to convince more people to apply for LPAs online, having set a target for the service to comprise 30% of all applications from April 2016 to March 2017. In its latest Annual Report, the OPG even admits it is willing to take ‘risks’ in striking a balance between ‘empowering and safeguarding’.

With the OPG already receiving over 1,000 calls to its contact centre every day, the organisations behind the campaign say the Government body is potentially exposing people to unacceptable levels of risk and in doing so may be compromising its ability to safeguard those who are most vulnerable.

Bryony Ruth Wilmshurst said: “An LPA is by far the most powerful and important legal document an individual can have, because it allows you to pass potentially life-changing decisions about your affairs on to a third party.

“It’s absolutely right that people should be planning ahead for the future with LPAs, but granting someone this sort of authority over your affairs is an extremely big responsibility for all parties involved. This is a specialist area of the law, and we recommend that anyone considering an LPA goes to a legal expert to ensure they get the right advice, consider all the options, and safeguard themselves for the future.”

Property Information Form: 7 Key Issues You Should Watch Out For
House buyers' complaints about misrepresentation and being lied to - how not to fall victim to the same traps that could end up costing you a fortune.
Continue reading >
The Stamp Duty Holiday in 2020/21: time to buy a new home?
ContentsThe importance of the housing marketWhat about property tax?Why does stopping collecting all that tax make sense?What has been the effect of 2020 issues on house prices?Does this mean the north/south divide is lessening?What will happen when the SDLT holiday is over?Should I take advantage of the SDLT holiday? Anyone who has been living on […]
Continue reading >
Free Wills in October 2020
As Wills and Probate solicitors, we hope you forgive us for going on about the importance of having a valid Will. Making a Will is a relatively inexpensive way of ensuring that your assets go to the right place when you are no longer around. Dying without a Will means that your loved ones are […]
Continue reading >